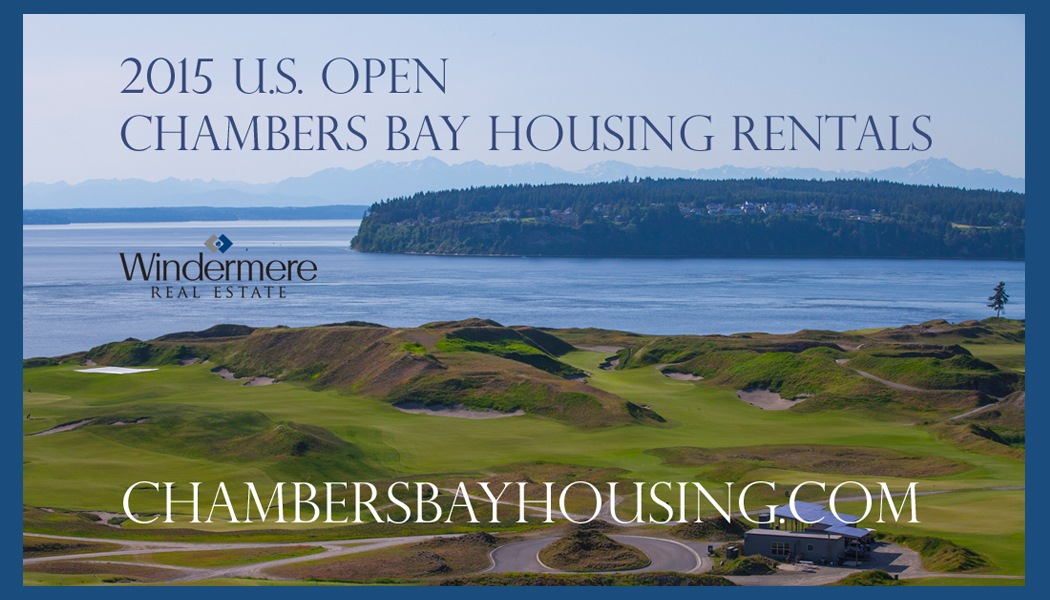 What a spectacular event the 2015 US Open at Chambers Bay was!  We had a wonderful time working with so many University Place neighbors and visitors to our area.  ChambersBayHousing.com was a stand out success in a category that was top of mind and somewhat controversial during the lead up to the massive event.  The importance of being prepared and maintaining relationships with people and organizations actually making the tournament happen was crucial.

It was an honor to have the United States Golf Association publicly share their thoughts on the job we did:

“Steve’s support leading up to the 2015 U.S. Open Championship at Chambers Bay was extremely helpful to our organization.  He was always eager to assist and provide options for folks attending, working, participating in, or volunteering for the championship.” – United States Golf Association

We also saw quite a bit of activity from the many articles and news stories that appeared in newspapers, magazines, television reports, and online media outlets.  The News Tribune ran a feature story that got picked up by the Associated Press.

In summary, we were very happy to be involved in the success of the 2015 US Open.  It was a lifelong memory and we're hopeful it comes back to the Northwest and Chambers Bay Golf Course.

Check out highlights from the epic final day of the tournament!  Congratulations to Jordan Spieth and Michael Greller.  Thanks for the memories.

Approximately 30 miles south of Seattle, you'll find the fantastic Chambers Bay Golf Course, home of the 2015 U.S. Open Golf Championship.  Carved into the shores of Puget Sound in the city of University Place, a suburb of Tacoma, Washington, sand dunes and native fescue grass set the scene for a challenging links course modeled in the style of legendary coastal courses in Scotland and Ireland.  The beautiful snow capped Olympic Mountains and majestic fir trees around the perimeter never let the golfer forget they're in Washington State.

Based on past U.S. Open events, former county executive John Ladenburg predicted the total economic impact to the area will be at least $100 million.  In comparison, the 2001 Major League Baseball All-Star Game in Seattle generated $50 million.

Private Housing has been a long standing tradition at USGA Championships, and the U.S. Open is no exception. It is a unique opportunity for you as a member of the local community to share first hand in the excitement and to embrace the U.S. Open Championship on a very personal basis. This is a fabulous opportunity to exhibit the warm hospitality that is the Pacific Northwest. If you have the resources and the time to commit, this is an opportunity you will not want to miss.

If you're interested in receiving information about renting out your home, or for a list of nearby available homes for lease during the 2015 U.S. Open at Chambers Bay, please go to ChambersBayHousing.com.

Windermere Professional Partners Property Management (WPPPM) will be offering rental services to homeowners during the U.S. Open Golf Championship in June of 2015.  WPPPM is not affiliated in any way with the USGA or Chambers Bay Golf Course.  During the tournaments, everyone must have a ticket to gain access to the Championship Events through the designated General Admission gates.  WPPPM has no ability to provide tickets for the event and the acquisition of tickets is the sole responsibility of the individual.

Thank you for your inquiry.